There's been a ground-breaking decision by the 9th Circuit US Federal Court of Appeals against taser abuse, entitled Bryan v. McPherson.  This decision was announced on December 29th, between Christmas and New Years holidays but it deserves our immediate attention and dissemination via our EasyWidgets:

The decision writes into federal caselaw many of the arguments and advocacy that we afrosphere bloggers have been making at our Days (months and years) of Blogging for Justice Against Police Pre-Trial, Extra-Judicial "Taser" Shock, Electrocution and Execution devices.  The Easy-Widget HTML code below enables us to educate the public of their newly announced rights.

The 9th Circuit Federal Court of Appeals agreed with us that:

This decision has direct legal effect throughout the 9th Circuit, consisting of populous California, Alaska, Washington, Montana, Oregon, Idaho, Arizona, Hawaii and Guam, and influential in other parts of the country.  Nearly 20% of America's population is within the jurisdiction of the 9th Circuit.  The Court announced what we have long insisted:

"A reasonable police officer . . . would have foreseen these physical injuries when confronting a shirtless individual standing on asphalt. We have held that force can be unreasonable even without physical blows or injuries." Bryan v. McPherson

We've got widgets up at 123 afrosphere blogs telling the public that, in many cases, when "Tasers" are used, "The price is too high". Now, lets post Easy-Widgets to inform the public that one of the most influential federal circuit courts of appeal in the country agrees with us that:


"The presence of non-minor physical injuries like those suffered by Bryan, however, is certainly relevant in evaluating the degree of the Fourth Amendment intrusion."  Bryan v. McPherson
Let's celebrate! Here's a new EasyWidget that takes readers to our anti-electrocution blogs. This Easy-Widget HTML (immediately below) links to Electrocuted While Black, but there are visibly identical widgets below that lead to Tasered While Black and the Police Brutality Blog.

The result is better than that for which many of us had hoped. Instead of arguing locally for changes to voluntarily enforced police taser policy, Bryan's lawyers in this case, and bloggers making similar arguments, convinced the 9th Circuit Federal Appeals Court to write these requirements and limitations into Federal caselaw, which is probably faster, better and politically safer than having the restrictions enacted into law by the US Congress.

"We, along with our sister circuits, have held that tasers and stun guns fall into the category of non-lethal force.   Non-lethal, however, is not synonymous with non-excessive; all force—lethal and non-lethal—must be justified by the need for the specific level of force employed."   Bryan v. McPherson

Not everyone -- blogger or reader -- has had a chance to read the whole Bryan v. McPherson case. So, the Easy-Widget quotes the most powerful language of the decision and links to our afrosphere blogs for more information.

In Bryan v. McPherson, the 9th Circuit Federal Appeals Court basically wrote into federal caselaw many of the arguments that we taser opponents have been arguing. But this is better than what many of us had sought, because instead of it being a change in local optionally enforced "guidelines," it's a change in obligatorily obeyed federal case law for the states in the 9th Circuit, and also, as the decision alludes, the 9th Circuit has enormous influence on other "sister" circuits courts.

Please join Electrocuted While Black in celebrating this decision by posting a widget that tells readers their rights and takes them to a blog where they can learn more, be it Electrocuted While Black or the Police Brutality Blog. Installation of the Easy-Widget below is a quick and easy way to quote some of the best parts of the case for your readers.


The three indictments include federal hate crime charges, as well as obstruction of justice, conspiracy, official misconduct and extortion charges, authorities said. A federal grand jury handed up the indictments last week, and they were unsealed Tuesday.

Derrick Donchak and Brandon Piekarsky are charged with a hate crime for beating Luis Ramirez in July 2008 while shouting racial epithets at him, prosecutors said. Ramirez died two days later.

"Following the beating, Donchak, Piekarsky and others, including members of the Shenandoah Police Department, participated in a scheme to obstruct the investigation of the fatal assault," the Justice Department said.

Tasered While Latino says, The Justice Department needs to re-opn a number of case files including the case of Esteban Carpio. See the report in the Police Brutality (and Atrocity) Blog: August 2007.

Police in Texas taser torture for low-level, non-violent misdemeanors like disruption of class or disorderly conduct

According to Cameron Langford at the Court House News Service, Police in Texas public schools are increasingly using force against children, including Tasers and pepper spray, and the "overwhelming majority" of police "interventions" involve "low-level, non-violent misdemeanors like disruption of class or disorderly conduct," a public interest group says.
Texas Appleseed claims the Spring Branch Independent School District is putting students at risk and violating the law by refusing to release its "use of force" policy.
More than 75 percent of Spring Branch, a suburb northwest of Houston, is black or Latino. The school district claims its use of force policy is exempt from disclosure because of the exception for law enforcement.
Texas Appleseed says it sent open records requests to 24 Texas school districts, seeking their police departments' use of force policies, and 11 produced the documents. The group say its investigation revealed accounts of police in Texas public schools using pepper spray and Tasers on students.
"The public interest in ensuring full dialogue around policies relating to use force on Texas school children outweighs any risk to SBISD-PD's ability to affect arrests or engage in law enforcement on its campuses," Texas Appleseed says in its complaint in Harris County Court.
Appleseed says that reports of Texas school police using pepper spray and Tasers on school children are becoming more common. It says the data its has received shows the "overwhelming majority of law enforcement interventions on Texas school campuses involve school-aged children cited or arrested for low-level, non-violent misdemeanors like disruption of class or disorderly conduct."   Read More HERE

TWB Publisher says: I'm glad to see that a watchdog group wants Info on Police Use of Force Against Schoolkids. It's time to stop the torture of school children in our public school system. Where is the U.S. Department of Justice when we need them to protect our children? Texas is not the only state torturing our children.

Let's build a blogger movement to stand in the gap for our children!

The Minneapolis Police Department is again defending itself against accusations that an officer went too far during an arrest.

Video given to WCCO-TV late Monday night shows a man with his hands on a squad car when an officer uses a Taser on his neck.

Attorney Albert Goins is suing the City of Minneapolis on behalf of his client, Rolando Ruiz. They're asking for $75,000 and that the officer involved be reprimanded.

The video given to WCCO starts only seconds before the Taser is used on Ruiz, not what led up to the incident. But in that time, no struggle can be seen before the officer used his Taser on Ruiz. What is seen is Ruiz with his hands on the hood of the officer's car.

The dash camera of the squad car was rolling when the officer approached Ruiz with Taser in hand.  see Video HERE

Another reason why you should join the stop taser torture movement.

The stats only tell part of the story. I'm glad to note that there will be a annual December 4th blogging event called, “Stop Taser Torture, blogging for Justice.”

The goal is to unite the world’s bloggers in posting about the same issue on the same day – Taser Torture in America, Canada and throughout the world.

Amnesty International says that between 2001 and August 2008, 334 Americans died after Taser shocks. The stun gun was deemed to have caused or contributed to at least 50 of those deaths, Amnesty says, citing medical examiners and coroners. Most suspects were unarmed, and many were subjected to repeated or prolonged shocks, according to Amnesty. The human rights group has called for governments to limit the use of stun guns or suspend their use. In November 2007, the UN Committee Against Torture released a statement saying “use of Taser X26 weapons, provoking extreme pain, constituted a form of torture, and… in certain cases, it could also cause death.”

Join in on December 4th. “Stop Taser Torture, blogging for Justice.” as we raise awareness and trigger a global discussion.

The ghost of Iman Morales and Michael Pigott

As reported in the NY Post, The widow of an NYPD lieutenant who one year ago today shot himself to death after being publicly blamed for a deadly Taser incident is suing the city, claiming police brass contributed to the suicide by scapegoating her husband.

Michael Pigott, 46, was in charge of the team that responded to a call for help from the mother of Iman Morales, an emotionally disturbed man who was standing naked on a first-story ledge of his Bed-Stuy building. Morales, 35, fell to his death after Pigott ordered a sergeant to Tase him.

Amid a public outcry, Browne and Kelly indicated that cops had mishandled the situation and that the officer in charge had been suspended. More HERE

Labels: The ghost of Iman Morales and Michael Pigott

MANASSAS, Va. - Prince William County Police responded to a noise complaint at a child's baptism party. By the time they left, a grandfather and possibly a pregnant woman tasered.

Check out The Blog "Tasered While Black"

Stop Taser Torture - Get A Widget For Your Blog 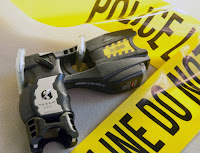